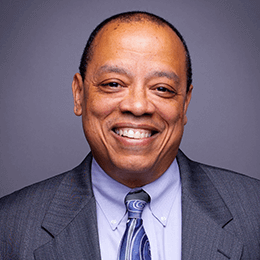 Jeff has been listed in Best Lawyers in America since 1993. He has been selected as one of the top 100 black lawyers in America by Black Enterprise magazine and is an elected fellow of the American College of Trial Lawyers, whose membership is limited to one percent of the attorneys in any state. He is also consistently ranked as one of the top 10 Criminal Defense Lawyers in Washington State by Washington Law & Politics magazine. Jeff has tried over 200 cases to verdict and represents a broad range of clients facing investigation or prosecution for white collar crimes and other serious felony charges.

After graduating from Harvard Law School in 1981, Jeff spent the next seven years representing indigent clients in state court at The Defender Association and then in federal court at The Federal Public Defender’s Office, both in Seattle. In private practice at SGB since 1988, Jeff has successfully represented individuals and corporations in state and federal court on charges ranging from first-degree murder to healthcare fraud. He also has extensive experience representing clients in lengthy grand jury investigations that have resulted in no indictment.

In addition to being a nationally recognized trial attorney, Jeff is also a respected teacher of trial advocacy, and has lectured on trial skills all over the United States. He is a faculty member of the National Criminal Defense College in Macon, Georgia. He is a past President of the Washington Association of Criminal Defense Lawyers and a winner of that Association’s prestigious William O. Douglas Award (2004).

General White Collar Criminal Defense: Jeff represents corporations, executives, and other professionals in white collar criminal investigations and prosecutions. He obtained a decision not to prosecute the CFO of a Fortune 500 company in an investigation of illegal backdating of stock options by demonstrating that any improper backdating was done without criminal intent. Jeff obtained a not guilty verdict for the owner of a Seattle excavating company charged with theft, possession of stolen property, and evading a fuel tax, after the defense demonstrated that the owner made his purchases innocently and believed that all taxes had been paid. He also obtained a decision not to prosecute a target of a federal investigation of improper oil drilling operations on the North Slope of Alaska.

Healthcare Fraud: Jeff represents healthcare institutions and professionals under investigation for fraud or misconduct involving the provision of medical services or billing for services. Jeff’s current clients include both large healthcare organizations and individuals. He obtained a decision not to prosecute several administrative professionals connected to a Medicare billing fraud investigation at the University of Washington Medical Center, including one individual named as a target of the investigation. He obtained a dismissal of a multi-count federal indictment accusing a physician of federal healthcare fraud by demonstrating severe problems with the government’s proof and the credibility of the government’s witnesses. Jeff also obtained a not guilty verdict for a dentist charged with six counts of Medicare fraud for alleged improper billing practices, by demonstrating that there was no intentional fraud and that Medicare’s complex and confusing billing regulations led to the errors.

Serious Criminal Charges: Jeff has represented numerous individuals charged with the most serious crimes. He has tried numerous homicide cases and is one of a few lawyers in Washington to win a homicide case by proving self defense to such an extent that the jury also returned an additional verdict awarding attorney’s fees, costs, and lost wages. He obtained a not guilty verdict for a former federal prosecutor charged with assaulting women on city buses. Jeff obtained dismissal of all charges against a Port Angeles doctor falsely accused of murdering an infant in a highly publicized and politically charged case. He also represented the international president of the Bandidos Motorcycle Club, who was charged in a RICO indictment that included allegations of attempted murder, arson, and witness tampering. The client faced a sentence that amounted to life. The case was resolved with a sentence of 20 months and the client retained the right to be an active member of the motorcycle club. Jeff also obtained dismissal of all charges against a King County man charged with solicitation to commit murder in the first degree, after intense investigation demonstrated that the charges were false.